This is a non-exhaustive list of the projects I’ve worked on over the years.

An experimental social interaction envrionment. The goal is to create a game-like space where particiapants feel comfortable sharing and interacting with each other.

Very much still a work in progress. The project page has a live demo. 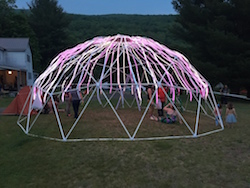 An interactive installation featuring 6,400 LEDs sitting on a geodesic dome and controlled via WiiMote. 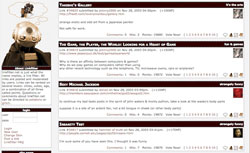 A community weblog I co-founded in 2000 that uses gamification elements to drive interaction and prevent spam.

It was shutdown in 2009, and then revived in 2015. It’s up at linkfilter.net, but currently registration is still closed. 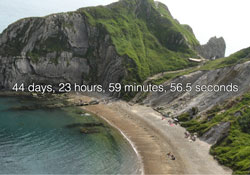 A weekend project to create a lightweight and easy-to-use countdown timer on top of an inspirational poster image.

LED panels arranged in an arc and a Mario-themed time and weather display. 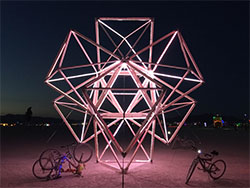 DomeStar’s LEDs were repurposed for the octahedron structure in front of Disorient at Burning Man 2015. 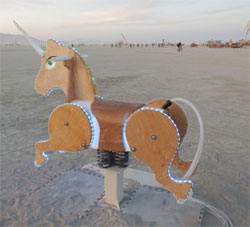 Donated some LEDs and code to light up Sophi Kravitz’ riding unicorns on playa at Burning Man 2015.

A crappy robot that I used at NYC Resistor to lower a key on a string to locked out visitors. “I don’t like it” says one reviewer.

Temple of the Unticketed

Max Henstell and I applied for a Burning Man Arts grant for this project in 2015. It was way over ambitious and I’m very glad they did not award us that grant. GitHub

I modified a python implementation of Mario Level 1 to work with Trammell Hudsons Megascroller LED display. In the modified version the players have to dash around the display to keep up with Mario. Github

A simple web based game that uses the accelerometer data to simluate throwing your phone across the room. GitHub

An LED installation that lights up diffused LED strips wherever you walk in front of them.

I organized the build for the Disorient Art Car Wash Sign in 2010. ACW

One of my first builds at NYC Resistor, a giant lite brite using colored plastic cups as pegs.

A technology blog I co-founded in the 90s. Wayback

A replacement interface for the Renegade BBS files system that I sold as shareware back in high school.

My old BBS about programming and the demoscene.